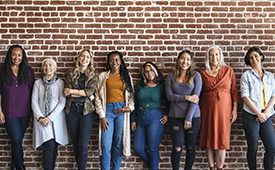 Violence against women is, unfortunately, still omnipresent, even in the 21st century. We are passionate about helping women in need and therefore Ecco Verde is running a fundraising campaign on International Women's Day on March 8th, 2021. For every order placed on the day, we're donating €1 to the Association of Autonomous Women's Shelters in Austria where women affected by violence can seek help and support.

Unfortunately, the statistics are staggering: In fact, more than 30% of women worldwide are still affected by violence. All the more tragic that almost 70% of all female murder victims are killed by their male (ex) partner. This means that domestic violence is seen as the main cause of death or damage to health in women (between 16 and 44 years of age) and, statistically, it is more common than women affected by cancer or involved in road accidents.

From a legal standpoint, violet crimes include the following:

18% of all women are affected by stalking

According to the official definition, stalking, also known as “persistent persecution”, is also a violent crime. It can be assumed that the number of unreported cases is much higher. If you have the feeling that you are being stalked or that you feel uncomfortable, then you can, and should, articulate this at any time! If the other person does not accept this, you should definitely seek support quickly!

How can I help women in need?

Do not look the other way when you are aware of someone who is affected by violence - regardless of whether you know the victim personally or not. It is best to keep an eye on the situation and seek help as best you can. Every single woman who is in need or feels distressed will be grateful for the commitment and support!

We avoid CO2 emissions wherever we can! Our remaining carbon footprint is compensated through eco-social projects.