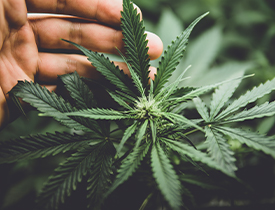 Better than its reputation & optimal for the body

Hemp as a medicinal plant - The effect of hemp on health

Hemp, also known under the names hashish, marijuana or cannabis has had a dubious reputation for years. However, recently the focus has shifted from the plant's psychoactive effects to the importance it has as a source of food or medicinal plant.

So far, the Cannabis Sativa plant is known to contain 480 active ingredients and more than 60 cannabinoids. Two of the best known are CBD - cannabidiol - and TCH - tetrahydro cannabidiol. Their effects on the human system could not be more different. But the use of cannabinoids in medicine is so interesting precisely because these active ingredients address special receptors in the body and can act through them. Scientists have found that the human body has its own cannabinoids and binding sites that can determine different processes in the immune and nervous systems as well as many other cells in the body.

The body's own cannabinoids are used in the brain, in the immune system, in the bloodstream, as well as in many bodily tissues. When released, they perform a variety of functions. However, these functions are still unknown - they are likely to be involved in the regulation of the immune system, learning processes and pain processing.

The medicinal use of hemp is particularly suitable for pain therapy, multiple sclerosis, nausea or vomiting. Products used in these instances are made from a wide variety of plant parts.

The cannabinoid most frequently found in the hemp plant, which is also the main psychoactive component, is THC. As such, it can have effects on the human psyche. The type of plant determines whether cannabis can have an intoxicating or calming effect on humans - as a result, the consumer is then either "high" or "stoned" which characterises it as an addictive or narcotic drug. Products containing TCH are generally prohibited in most countries.

The second most common cannabinoid from hemp plants is CBD. Unlike the former, it has no psychoactive effect and influences completely different receptors, such as those for adenosine or serotonin. These two can play a role in regulating body temperature and the sensation of pain. CBD is also increasingly used as an active ingredient in cosmetics and beauty care.

It is now known that CBD and THC interact with each other within the body, including the fact that CBD can weaken or even cancel out the psychoactive effects of THC. However, CBD products may only contain a restricted amount of THC that is prescribed by the EU. Hemp products, such as oil, protein, nuts or leaves that are offered as food are prohibited from containing any psychoactive components.

Hemp in cosmetics or as a food source

The healthiest fats for the body are polyunsaturated fatty acids, such as omega-3 or omega-6 fatty acids. Since they cannot be produced by the body itself, it is essential to consume them with food. They are important for the connective tissue, hormonal balance, the immune system, the efficiency of the brain, breathing, nerves, heart and circulation, and the skin - in short, polyunsaturated fatty acids are essential for the whole body.

Hemp is currently the only plant known to science that contains such a high proportion of polyunsaturated fatty acids. Hemp oil and seeds contain more than 80% polyunsaturated fatty acids. The human metabolism depends on the ratio of omega-3 and omega-6 fatty acids so that the organism can use them optimally. The composition of hemp oil has a ratio of 3: 1 (omega-6 to omega-3) and is therefore near to perfect for the human body. These are joined by omega-9 fatty acids and the rare but also particularly valuable gamma-linolenic acid (GLA) for the body. This composition makes hemp oil the most balanced oil known to science today.

The proteins that can be extracted from hemp are also extremely rich in nutrients. They are particularly easy to digest, contain a lot of fibre and are also alkaline. In addition, the composition of amino acids is near to optimal, contains the above-mentioned essential fatty acids, numerous minerals, trace elements and vitamins.

We avoid CO2 emissions wherever we can! Our remaining carbon footprint is compensated through eco-social projects.